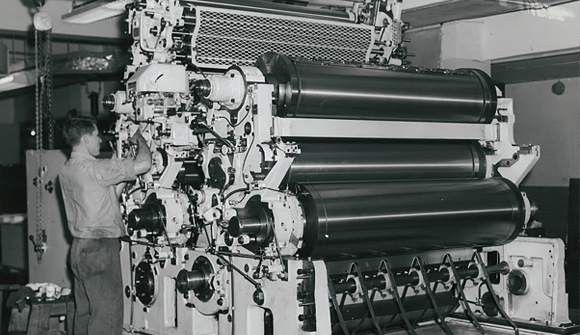 From hand stencils and stone tablets to computers and digital printing, humans have been expressing themselves in “print” going back to as early as 3500 BCE. Have you ever wondered how printing has evolved from the Bronze Age to the 21st century? If so, come with me on a journey back in time as we learn about the history of printing!

Where it all started: Woodblock Printing, China

Before any type of printing method was developed, early societies used seals to impress images onto tablets or stamps pressed onto cloth. Texts were most often copied by hand, a laborious process. The invention of paper (credited to a Chinese court official named Cai Lun in the 2nd century AD) played a pivotal role in written culture and the book world.

Woodblock printing, developed in China around 200 AD, involved carved wooden blocks brushed with ink and then transferred to parchment or vellum. The earliest samples of this are said to be from around 220 AD.

In the 480s, a man named Gong Xuanxuan professed to have been given a magical jade block by a supernatural being. Gong declared he was able to print without having to brush the ink and transfer to paper. It has been postulated by modern historians that the magical jade block was actually a printing device, making Gong Xuanxuan one of the first, if not the first, printer.

This method of printing changed the shape and structure of books. Advancements in binding styles like concertina, whirlwind, and butterfly binding led to scrolls being replaced as readers did not have to unfurl an entire scroll any longer. The rise of woodblock printing also led to a decline in book prices.

Movable type is made of components of characters that are arranged on a press. They are then brushed with ink before paper is pressed against it so the characters are transferred.

It was invented by commoner Bi Sheng, who first used porcelain and then developed a wooden movable type. Porcelain did not maintain a consistent size when fired, and both it and wood did not handle the ink as well, so they were abandoned in favor of ceramic type.

In the 13th century, type characters cast from bronze were developed in a method described as extremely similar to Gutenberg’s. At the end of the century, Wang Zhen invented a complex system of revolving tables that improved the efficiency of typesetting and the quality of printing.

Pivotal stop: Movable Type in Europe and the Printing Press

By the 15th century, block printing had arrived in Europe. Block books were wood-cut books with text and images usually carved in the same block, which was a cheaper alternative to movable type. These were mainly short, heavily illustrated books.

You have probably heard of the Gutenberg Bible. It was in the mid-1500s that Johannes Gutenberg, a goldsmith, invented the first printing press. He greatly advanced printing technology by using a winepress as inspiration and retrofitting it into his press design. He made his own oil-based ink, which lasted longer than water-based inks. Gutenberg also used an alloy of lead, tin, and antimony for his type, the same components used today. His sturdy, metal type pieces led to more uniform lettering, making possible the inventions of typographic printing and fonts.

Fun Fact! In 1455, the first Gutenberg Bible was published with a print run of 180 copies.

Moving on: The Rotary Press, USA

In 1844, Richard March Hoe patented his revolving press, which consisted of impressions curved around a cylinder to print on long, continuous rolls of paper. Two decades later the rotary press was improved upon by William Bullock, whose press allowed for large rolls to be automatically fed rather than hand-fed. The press was self-adjusting, printed double-sided, folded the paper, and was able to cut sheets with rapid precision.

Fun Fact! The rotary press was the first press suitable for large print runs and the technology is still used today in sheetfed offset printing.

Across the pond: Offset Printing, England and America

The term offset comes about because the printing technique does not transfer ink directly onto paper; instead it is ‘offset’ or transferred to another surface.

The first offset press was created in England in the late 19th century by Robert Barclay for printing on metal. His development combined mid-19th century printing technologies and Richard Hoe’s rotary printing press. The offset cylinder was covered with specially-treated cardboard that transferred the printed image

At the start of the 20th century, Ira Washington Rubel of New Jersey adapted the offset press by replacing the metal roller with rubber, which made the printed page clearer and sharper.

Fun Fact! Rubel made this discovery accidentally by forgetting to load a sheet of paper and noticing the rubber produced a more accurate image than metal.

Digital printing is a method of printing from a digital-based image directly to a variety of media. The first digital printing presses came onto the market in the early 1990s, however its beginnings can be traced back to the 1970s by Polish-born Benny Landa.

As a child in Canada, Landa’s father developed a new camera using bicycle parts and pulleys that captured images directly onto photographic paper, thus avoiding the need for film. Landa, who emigrated to Israel in 1974, later used this concept to start his company Indigo Digital Printing and develop the world’s fastest photocopier. He later discovered the ink, Electroink, could also be used in printers.

Landa has been called the “father of commercial digital printing.” In 1993, the world’s first digital color printing press was launched, and called Indigo in Landa’s honor. The new process negated the plate setup process, eliminating costly and time-consuming steps associated with offset printing.

Fun Fact! The first digital print was released in 1989 on watercolor paper. A prepress printer was modified for inkjet printing thanks to the interest and backing of Graham Nash, co-founder of the group Crosby, Stills, Nash and Young.

Digital printing is what we do here at Gorham Printing, and we upgrade our equipment every few years. We still have reliable digital dry toner printers that are printing in CMYK, including our black-and-white only printers that help keep your costs down by only having K(black) toner printing, and our color printers for all covers along with any interior color pages. Keep an eye out for an upcoming blog post about our printers, which will detail the features of each one of our machines.

Whether you’re new to digital printing or not, we hope this tour through printing history was helpful and interesting! If you have questions about how to set up your digital files for printing, or if we can tell you more about our printing process, please give me or Jennifer a call.

Candace moved to the PNW in 1998 after getting her B.A. in English Literature with a minor in History. She previously lived in Portland, where she owned and operated a professional pet-sitting company. Candace enjoys writing fiction and crocheting, and loves her label-maker.

If you've ever stopped by Gorham Printing to pick

Don Trosper is the Public History Manager at the h

After the holidays and the snowstorm, we are back

I love an immersive experience, and when it comes

"On a small island in Puget Sound, a group of adul

If you think you've seen it all, you probably have