COVID-19 UPDATE:  We're Open and Taking Steps to Protect You and Your Books.  Read More Here

New to Gorham Printing?    Request a free copy of our 64-page self-publishing guidebook 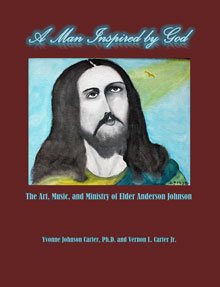 A Man Inspired by God
The Art, Music & Ministry of Elder Anderson Johnson

What happens to a little boy who is struck by lightning and knocked unconscious when he is just eight years old? Young Anderson Johnson immediately began preaching after he was hit by lightning during a terrible thunderstorm in a cornfield in Lunenburg, Virginia. He became a child prodigy, and as early as age twelve, he pastored a church in Vineland, New Jersey. A couple of years later, he joined the Ivy Avenue United House of Prayer in Newport News, Virginia, became a protégé to Bishop Charles M. Grace, and established places of worship from New York to Florida for the United House of Prayer. As Johnson matured, he became an exceptional evangelist, a remarkable musician, and a gifted self-taught artist who boldly professed his faith in God. This book traces Johnson’s life from his childhood in Virginia to his solo expeditions across the United States. As a free-spirited traveling evangelist, musician, and gospel singer, Anderson Johnson journeyed throughout the United States singing, preaching, and spreading the word of God.

After traveling more than forty years, Johnson returned to Virginia, looked back over his life, and reassessed his ministry. He comprehended that his faith had sustained him throughout his life, and he decided his new mission was to teach others how to live by faith. He established the Faith Mission as his place of worship, gradually filled the sanctuary with thousands of paintings, and eventually became an outstanding, self-taught artist. God inspired him to support himself by displaying and selling his art. Patrons in the United States and abroad visited his Faith Mission, and he sold his paintings throughout the United States and as far away as Britain, Israel, and Germany. Elder Johnson passed away in 1998. Today, much of his artwork is permanently housed in the Anderson Johnson Gallery at the Downing-Gross Cultural Arts Center in Newport News.

Reviews for A Man Inspired by God

This book truly represents my Uncle Andy, and it would have made him proud. It is obvious that a tremendous amount of research went into writing the book, and I read a lot of things that really hit home.

Yvonne and Vernon Carter were close friends of Elder Anderson Johnson. They visited him often at his Faith Mission and cherished his orations about his faith in God. During these visits, they purchased various paintings, and Vernon frequently photographed Elder Johnson, his Faith Mission, and his artwork. The couple has approximately twenty-five paintings on display at the Anderson Johnson Gallery in the Downing-Gross Cultural Arts Center in Newport News, Virginia.