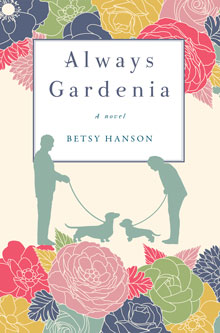 Two years after the death of her beloved husband, Torre, fifty-six-year-old Gardenia Pitkin is adjusting to life as a widow. She’s lonely and struggling financially, but she counts her blessings—her son, Hans, and grandson, Milo; her good friend Sylvie; and a new job as an administrative assistant in the English department of the University of the Northwest in Seattle. And her eccentric boss, the Chaucer specialist Arnold Wiggens, proves to be as besotted with his dachshund as Gardenia is with hers.

But enter stage right Lex Ohashi, who seems determined to court Gardenia, and Dr. Laurel DuBarr, a new adjunct English professor, who quickly becomes Arnold’s romantic infatuation. Meanwhile, Gardenia suspects that her daughter-in-law, Caitlin Curlew, is carrying on with another man. Should she tell her son? Does she want a new relationship with Lex? And what about her blossoming friendship with the quirky but endearing Arnold Wiggens?

With nods to the wry comedic sensibility of Barbara Pym and her respect for the role of “trivialities” in human life, Always Gardenia combines laugh-out-loud moments with wise reflections on friendships, families, and loss, as well as the complex relationship between mothers and their grown sons.

In cheerful, lively prose that pays homage to the novels of Barbara Pym, Always Gardenia skewers and celebrates middle-aged romance, English department intrigues, competitive mothering, brunch, and drum dancing. Betsy Hanson has a capacious heart: Her characters maintain their dignity despite the degradations of living beyond the flush of youth, among friends who outdo them but are too kind to say so. Every hurt, tentative pleasure, and human foible sparkles with authorial precision. The laughable is also tender for being absolutely true. 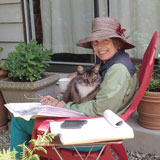 BETSY HANSON is the co-translator and editor, with Yukiko Tanaka, of This Kind of Woman: Ten Stories by Japanese Women Writers, 1970–1976 (Stanford University Press), the first English translation of short fiction by mid-twentieth-century Japanese women writers. She wrote book reviews for The New York Times Book Review for ten years and has created and directed a dozen one-act plays. Ms. Hanson has received writer’s grants from the Elizabeth George Foundation and the city of Seattle.

In March 2018, Ms. Hanson presented a short story, one of the top three entries in a contest sponsored by the North American Barbara Pym Society, at the group’s conference at Harvard Law School in Cambridge, Massachusetts.

Ms. Hanson has two grown sons and shares a 320-square-foot tiny house with her husband and two cats in Northeast Seattle.