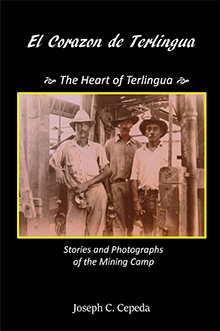 The iconic ghost town of Terlingua, Texas has a rich history - a history that began when cinnabar mineralization was discovered in the area. The mercury ore was mined by a workforce of mostly immigrant miners that came across the Rio Grande (only a few miles away) to work in the mines at the beginning of the 20th century. This history has remained largely untold, residing in the memories of those that grew up and worked in the active mining camp.

This book tells the story of the unique culture, part Texan, part Mexican, that developed among the mine management and the miners and their families. It is also the story of the Cepeda Family that arrived in Terlingua in 1911, and left only when the mines closed in 1944.

What is striking about El Corazon de Terlingua, other than the fascinating details of how mercury was mined and smelted in the remote west Texas desert in the 1930s, is the sense of nostalgia, wonderfully conveyed by Cepeda, that the miners and their families felt about Terlingua after the mining era ended. These people formed what Cepeda characterizes as a 'unique Texan culture' of workers who had come from Mexico to live north of the border in a region distinct geologically, geographically, and culturally. Certainly, these people worked under dangerous conditions for extremely low pay, held in thrall by the company store and shrouded under a 'cloak of invisibility' enabled by isolation and prejudice. And yet they developed a powerful sense of place and homeland, 'El Terrenazzo' as Cepeda records it, that their collective memory of the place as it comes through oral tradition is of a place of wonderful community, solidarity, and purpose.

Cepeda makes an important point, through an uncle's reflection on the history, that Mexicans and Mexican Americans, whether vaqueros, mineros, or irrigators, certainly had an important impact and contribution on the development of the American West—they brought not only their laboring bodies, but real know-how for which they are seldom credited.

Cepeda's El Corazon de Terlingua deserves a place in all good libraries of West Texas and the US/Mexico borderlands.

JOSEPH C. CEPEDA grew up in southwest Texas hearing the stories told by his father's family about growing up in Terlingua. He first visited the by-then ghost town of Terlingua while in grade school and returned many times to both Terlingua and Big Bend National Park. When he retired from teaching geology in the summer of 2020 (in large part because of the Covid-19 pandemic) he had the time to complete this book.