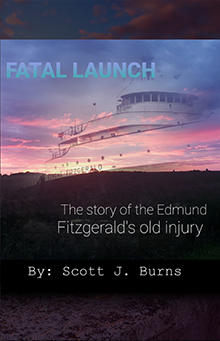 The Story of the Edmund Fitzgerald's Old Injury

The mysterious sinking of the Great Lakes steamship freighter Edmund Fitzgerald has puzzled the minds of the shipping world since the tragic event took place on November 10th 1975. However, one man lives his life with the suspicion of the true reason as to why it suddenly sank, and is determined to seek out information and evidence to confirm his suspicions.

This fictional story follows the life of this man, who was present during the Fitzgerald's earliest moments of existence, to her sinking's aftermath that accelerates his quest for the truth. Meanwhile, the story alternates in time to the Edmund Fitzgerald's final voyage; describing the everyday life at sea of these hardworking crewmen. Unbeknown to these proud and professional sailors, they are about to fall victim to a mistake made many years before their assignments aboard the Fitzgerald.

This fictional story presents a new theory as to why the proud freighter sank on Lake Superior on the fateful November night.

The merchant marine was very prevalent on my father's side of the family and would be a driving force behind our ultimate love for Great Lakes shipping. My father spent 5 years sailing the Great Lakes freighters, working in the engine-rooms as a coal-passer. His service time during this period was during the late 1950s and overlapped with the sinking of another Great lakes freighter, the Carl D. Bradley. His ship was anchored for the weather nearby in the northern Green Bay region.

My uncles also had ocean sailing experience as well, serving merchant supply convoys crossing the dangerous North Atlantic during World War Two. One uncle to which was an expert navigator who could skillfully navigate celestially and by using the stars at night in particular.

My lifelong knowledge of the industry would culminate into the writing of this book. My sailing experience was brief, having (shipped out) in the early 1990s. Stints aboard the M/V Burns Harbor, Steamship Armco, and Steamship Middletown, offered me a glimpse into the (behind the scenes) look at the industry. Much information was obtained by countless hours of conversation with ex-crewmen of the Fitzgerald while I was assigned to Fitzgerald's ex fleet-mates's Armco and Middletown. And very relevant engineering information was provided by an actual relative of mine who sailed the Fitzgerald during the early 1970s.

My 'daytime' job is working as a technician for a giant telecommunications provider. My hobbies include the early stages of writing about the subject of the Great Lakes.