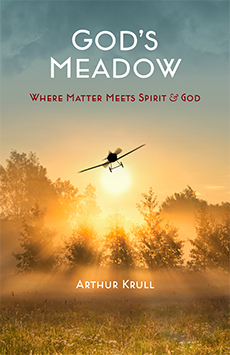 Where Matter meets Spirit and God

God’s Meadow – The first of a series of two books – Synopsis:

From 1914 to 1945, the world experienced many tragic events. Foremost among those were World Wars I and II and the Spanish flu pandemic of 1918 through early 1920. World War I became a training ground for the more massive and devastating World War II.

As the first shots of war sounded, two German teenagers, oblivious to the war, fell madly in love. Gerda, a brilliant girl, became a world-renowned scientist because of her research on the origination and prevention of the Spanish flu virus. That virus originated in Kansas and was carried to Europe by the American doughboys. Otto accepted an offer to fly a German air machine. He entered a cloud bank, became disorientated, and crashed into God’s Meadow. There he was visited by the spirits of Descartes, Nostradamus, and God and was assigned a mission to teach love and respect for others. His brother Karl sustained a severe brain injury during the war and was visited by the same spirits as Otto.

After the war, Germany was in political, economic, and social disarray. By 1930, a new government evolved with world dominance as their commitment. The newly formed Nazi party kidnapped Gerda and forced her to join their staff of scientists. She refused to help with their chemical warfare department but instead accepted a position in ocean research. That department would allow her to continue her investigation of microbiology. Gerda, a Jew, knew she had to comply. The Nazis had seized her parents and Jewish friends and imprisoned them in a camp.

I really liked it and enjoyed the story of Otto and his family. It was well written and it definitely peaked my interest in what was going to happen next. Also, at the end, I was eager to read more so therefore it was a perfect ending spot!

Interesting how one can read the concepts in different ways to find/have different meanings. It makes one think, question, challenge, and that is exactly what you wanted to do. Personally, I enjoyed it very much!

Art Krull's new novel, God's Meadow, works as both a love story against the backdrop of Hitler's ascendancy and a meditation on philosophical dualism. We see the love of Otto and Gerda evolve from teenage crush at the outset of World War I to marriage and family household, as Otto cultivates a spiritual philosophy reminiscent of René Descartes’ and Gerda, who is Jewish, becomes a world-renowned epidemiologist committed to combating the spread of plague. Here is philosophy with a heart and romance with intelligence. What a fine, full combination Art Krull offers. Buy your copy; cherish it; and reread it several times. And then go buy copies for your family and friends!

Art was born an analyst and constantly asked, 'Why?' He was very interested in religions which he later realized his genuine interest was spirituality. His path was to be a minister, but how does a young boy accomplish that task? His Pastor told him to listen for a calling that he did receive just before entering college. His calling was clear. Do not wear the uniform of the clergy. Live your life respecting and loving others. God will deal with all other issues, but questions remain. A philosophy course changed his life when he read Descartes.

Art began his career in the Air force as a jet pilot instructor. He put his spiritual questions on hold until he was a crew member on an L-1011 hijacked to Cuba. Everyone survived the life-threatening event, and after thirty years of telling his story, he was encouraged to write a book and authored, 'Hijacked-A Critical Change of Plans.' He is successfully lecturing and selling the non-fiction narrative and is now addicted to writing. He began a series of spiritual fiction books presenting a modern view of age-old religious and spiritual concepts.

God’s Meadow is the first in the series.