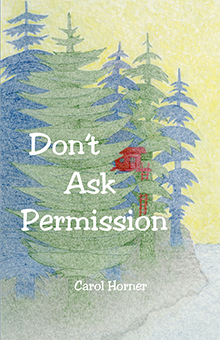 Take an abandoned farmhouse, a dilapidated barn, and a rickety chicken coop on the end of an island in Puget Sound, add nine adventurous children and stir with six creative grandparents.

Watch them secretly organize a summer camp for their grandchildren in their upscale retirement community, right under the noses of the management. Hang on for a wild and fun read. Share their anxiety, join in the fun, and feel the thrill as they build a treehouse, act in a play that the kids write, adopt a reclusive potter, cook in a bartender’s Bistro, and catch a ferry to explore Seattle.

Discover why the title, Don’t Ask Permission, fits this mix of people and the events of the story—and how they keep the summer camp hidden for two years.

CAROL HORNER lives in a retirement community in the Pacific Northwest. As a young woman she was a reporter on several newspapers and was editor-in-chief of a small newspaper. Then, married, with three small children, she moved many times, following her husband’s work as a plain-clothes investigator for the military. They lived in Istanbul for several years and in Tokyo where she had a part time job with the Japanese Ministry of Business and Industry. In mid-life, she divorced and took her children to Seattle where she earned a graduate degree in Counseling Psychology at University of Washington. She worked as a therapist in a Seattle Mental Center, then joined the faculty of a small college. After retirement, she studied art and sold many of her artworks. With the advent of Covid-19, she returned to her first love, writing.